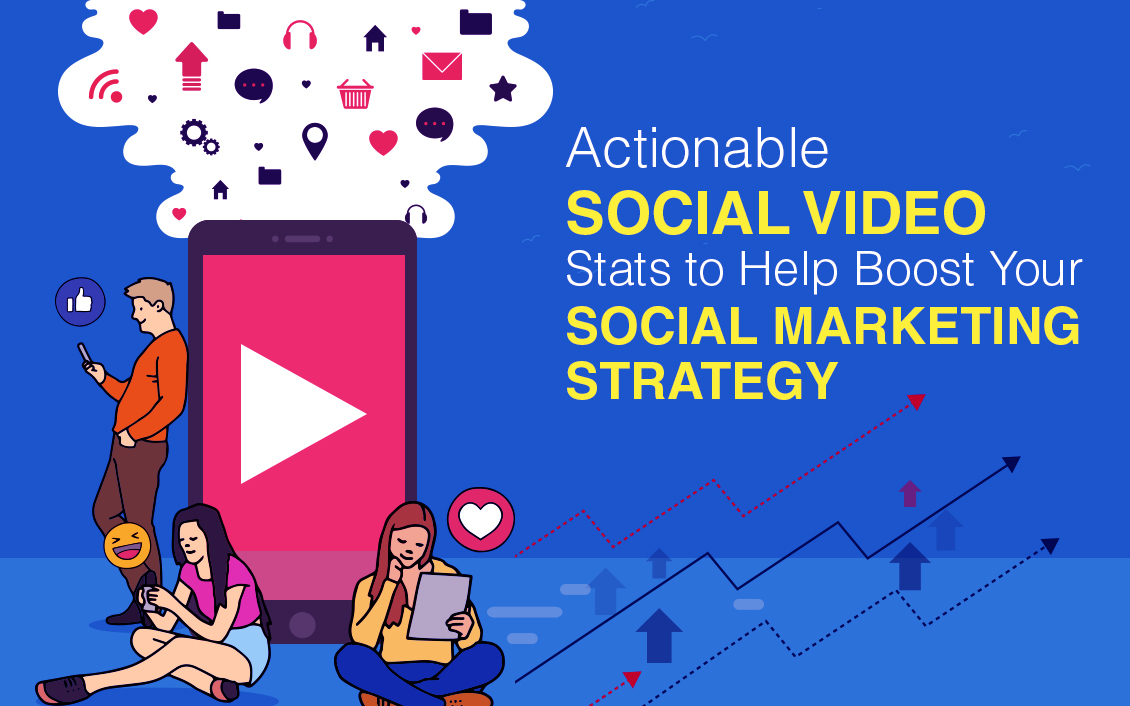 In order to be successful with your video marketing strategy, it is imperative that you keep yourself informed about behaviors and trends in the industry.

In this article I’m going to list 6 essential social video stats and give one actionable takeaway for each one , hopefully, you will use in your video marketing strategy.

According to wyzwol.com, video marketing is on the rise. This trend is not  a hype, as other data in this article will suggest, which means that if you don’t want your company to be left behind, you have to start thinking about using video as part of your promotional strategy.

Actionable Takeaway:If you have not yet tried video as part of your promotional arsenal, I urge you to give it a try with at least one video. It doesn’t have to include all the bells and whistles of a professional production, it could be a simple yet well-made how-to-video featuring your product. Measure its engagement and compare it to your current promotional strategy. I assure you the results will confirm why video as a marketing tool has jumped 63% in the last year.

The point is that there’s a reason why businesses are increasingly more interested in a video… it just works!

Social media audiences are impatient. Internet audiences, in general, are impatient, thus shorter videos make a lot of sense. Getting your message across in a quick sixty-second video is one way to lighten their anxiety. Even facebook thinks “creating short videos of 15 seconds or less can significantly drive up video completions”. This is likely due to the fact that short videos have no time to waste and have no choice but to get to the juicy stuff early on.

Actionable Takeaway:Make short 15 second versions of your longer videos. Doing this will force you to keep the message dynamic, simple and straight to the point. It also makes the video way easier for the viewer to get through. You’d be surprised how such a deceivingly simple exercise, will actually improve your overall message and mission as a company.

3.) 92% of mobile video viewers share videos with others (Virtues)

The convenience of having your entire social life in your pocket was bound to create this type of behavior. I mean, why wouldn’t you share something you find value in, especially when sharing it only requires a few taps on your screen.

Actionable Takeaway: Make your video mobile friendly. How so? Start by recording your video vertically. That’s right, a vertical video is no longer considered bad video graphics judgment, it is actually becoming the norm. During playback, the video will fill up most of the screen without the user having to tilt their phones. If 92% of mobile video viewers are sharing video, you might as well make it even easier for them to do so.

4.) 4 out of 5 consumers believe that demo videos are helpful (Animoto)

Spec sheets and comparison Matrixes are all well and good, but let’s face it, there is nothing better than actually seeing how something works. Promotion should not only be about selling, it should be about informing your buyers about both the benefits and the features of your product. An informed buyer is a satisfied buyer.

Actionable Takeaway:Identify the most misunderstood features of your product and make clear and easy-to-follow videos of how to properly use such features. Not only will people learn more about your product, they will also see that you are actively providing the kinds of resources they need for a better experience.

Either people hate to sound or people are consuming video in situations where they can’t adequately listen to it. Surely, it’s the latter.

This tells you a lot about how ubiquitous video has become. To such a great degree, that people seem to be watching videos even during less than optimal hearing conditions. That’s just how incredibly captivating the moving image is.

Actionable Takeaway:The obvious takeaway is to add subtitles. However, the real takeaway is about how you should approach your video in the first place. It should inspire you to focus on the visual aspects of your video. I mean if your video requires the use of a voiceover to be understood, then it really isn’t a very interesting video. So sure, add subtitles, but first see what you can get away with without using them. This will force you to think visually, making your directorial choices way more engaging. Remember it’s all about that old adage: “Show. Don’t tell.”

6.) 22% visited the website named in the video ad (Video Brewery)

Just because a good percentage of people happen to visit the named website, it doesn’t mean you should mention your company’s website every two seconds for the duration of the video. Instead, mention it when necessary so that it sounds casual and befitting of the context.

Actionable Takeaway: If it just so happens that such a significant percentage of people end up visiting your website after having learned about it in your video, then make sure your website is in tip-top condition to handle the visits. In 2018, it seems, there are few things more discouraging than waiting for a website to load. Especially for one that you were looking forward to visiting. So invest in your site so that you don’t disappoint your potential customers.

38% of marketers have published video content on LinkedIn. Of those who used it, 75% found it to be an effective strategy.Link

I know what you are thinking, Linkedin doesn’t exactly fit under the Social Video category. However, I would be remiss if I did not point out the opportunity behind using Linkedin. Out of all the major networking sites (whether professional or Social), Linkedin is the least explored in terms of video marketing. And it seems that a large percentage of those who used it for such purposes actually found it useful. Also, keep in mind that LinkedIn recently launches its native video feature.

Actionable Takeaway: Get your video on Linkedin and fast! Do it before space gets too crowded.

When it comes to using social video for your marketing efforts, it’s not a bad thing to go with your gut. A lot of original and refreshing work is created that way. Having said that, being on the lookout for where behaviors are heading is probably a wise choice. You don’t want to seem outdated.

The point of this article is not about taking my six takeaways as gospel. If anything is about encouraging you to look for your own data and come up with your own founded conclusions. That’s how the best strategies are made.