What Should You Know About Google’s December 2020 Core Update?

It was quick. No, super-quick!

Google keeps the excitement alive. Building on its deep-rooted quirkiness, Google rolled out another routine core update on 3rd December 2020. For beginners, it was a substantial update that impacted millions of website – both in good and not so good ways. As we talk, Google’s December 2020 core update has fully rolled out.

How will it impact you and what are the critical insights from the update? Read this blog to find out!

How Impactful was the Update?

Google rolls out a series of updates every few months that it terms as ‘broad core update.’ This simply means that it does not specify the updates owing to any particular region, location, website category or keywords – the update is just generic. However, as far as its impact is concerned, hundreds of thousands of websites felt it.

4th December 2020 was the day when the major impact of this core update was felt across the business world – as seen by MozCast that breached the 112-Degrees F on its own scale. Similar observations were made by other Google Algorithm monitoring platforms and tools. 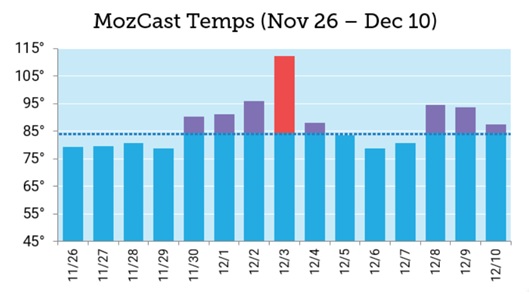 Early indications of the December 2020 core update being a major one, even more impactful than the January 2020 or May 2020 updates, seem to be true. As indicated by SEMRush, the SERP volatility on Dec 4, 2020 had a score of 9.4. This was considerably higher than the SERP Volatility score of 8 after the January update.

As per RankRanger, the following is the impact of the latest Google core update as compared to the previous one: 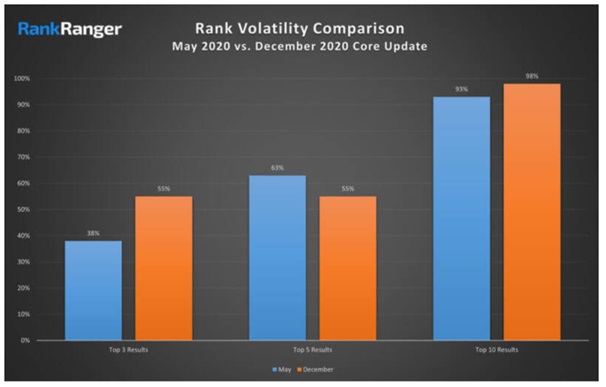 How Have the Major Websites Fluctuated Since the May 2020 Update?

The answer to this is – ‘Mixed.’ Some domains saw a spike in their rankings and traffic while others saw a pit in their traffic scores. However, the websites that suffered a loss of traffic are considerably few in number as others like them remained unaffected. Take a look below to get an idea of how some major sites were affected- 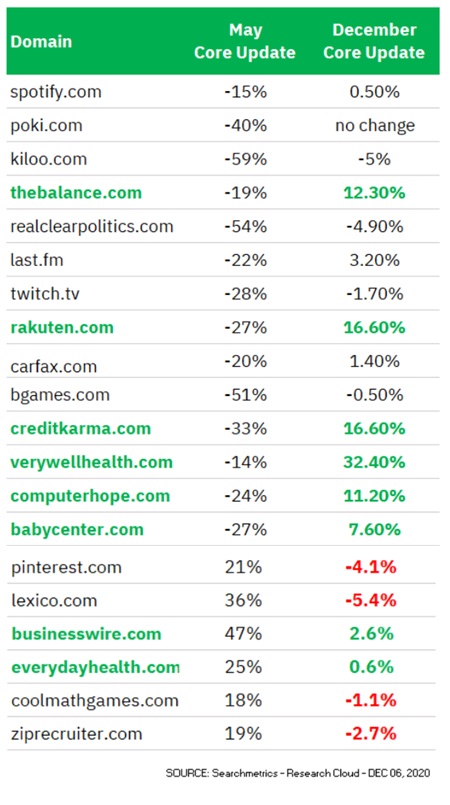 Standout Facts of the 2020 Core Update

The picture about ranking factors and actual update rollouts only got clearer after 2 weeks since the update was deployed. Leading search engine analytics platforms and new sources have confirmed the following facts about this update-

What do the experts say?

Marcus Tober, Founder of Searchmetrics, stated – “we can already see some clear shifts in rankings in typical areas related to E-A-T and content – music, health, news, and e-commerce – but unlike the other updates, there is no clear pattern yet. So far, data shows us there hasn’t been a major rollout of the Core Update in Germany and other countries outside of the US yet. We’ll continue to monitor the impact globally over the coming days and weeks.”

Google is quirky, and its updates will continue to surprise us in the future. If your website saw a boost in traffic post the update – kudos! But, if it did take a hit, we’re here. We fix things like these when they occur in the digital marketing landscape. Our team is adept in propelling businesses up in their domain search results when they want supercharged returns.

Let’s talk growth in 2021 – no matter what the Google update is!