In today’s marketing world, most of the brands all across the globe are running a User-Generated Content Campaign in order to market their products in a better and more effective way. With the help of social media, brands are asking their customers to share their unique and creative ideas with the world.

If Content Marketing is the voice of today’s marketing world, then user-generated content is the language marketers use to promote their brand. It is trustworthy and highly engaging. That is why it has assumed so much importance to generate more sales for businesses and expand their customer base.

Also Read: 5 Content Marketing Trends That Will Rule In 2016

Any content that users create over the internet in the public sphere sharing their experiences with your brand products and services can be treated as User-Generated Content (UGC) or User-Created Content (UCC) for your brand.

Users create UGC with their free will only when they are satisfied enough with your brand’s products and services. Hence, it is claimed to be more authentic than any other form of content.

Reports indicate that websites that blend and display their brand content with user-generated content experience better and higher user engagement.

Authenticity is the most important thing in today’s online marketing world. User-Generated reviews and ratings tend to carry along that authenticity along. Hence, they tend to trust those reviews and ratings more than any other brand-generated content. UGC is the most authentic and most trusted form of content that can help you build a long-lasting relationship with customers.

Research shows that people trust UGC 50% more than any other form of data. UGC is created by the users of the brand, so other customers can better relate to it. UGC is created inspired by satisfying customer experience with your brand products and services. Hence, that’s the most trusted form of brand advocacy that there is.

People love UGC. They love to interact with the content created by other users. In fact, people love to participate in the UGC campaigns immensely because of the great global exposure it provides to the participants.

Better reviews and rankings also give a positive sign to the search engine and hence it helps to gain better SERP. There are many user-generated content websites in the market.

Now we are going to discuss the top 10 examples of user-generated content marketing.

Once Apple users were dissatisfied with the average camera quality of the pictures taken in low light. Apple was really quick to spot this and in no time Apple launched their #ShotInIphone campaign to regain their lost trust among the users.

Apple lost a lot of fans due to this issue and in order to redeem that Apple put more emphasis on this campaign. This campaign asked new and the old Apple users to take photos in low light and share them online.

The most beautiful photos were then posted on Youtube under the hashtag campaign #ShotInIphone. The campaign focuses on showcasing the photos of common people shot in low-light. With such an innovative user-generated content campaign, Apple was able to redeem the trust back among the users.

Coca-Cola’s marketing team came up with the idea of the #ShareACoke campaign. In no time the campaign gets a great response all over the world. 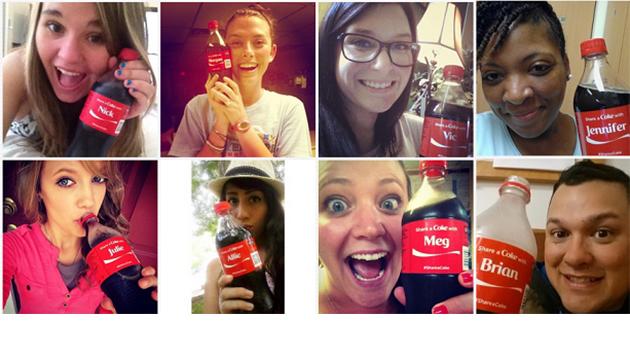 The idea of this campaign first came up in the year 2012 in Australia where the brand printed 150 common and popular names on its bottles and asked the people to “ShareACoke” with their loved ones.

Inspired by the name of the series “ Stranger Things”, Netflix decided to promote the series using user-generated content. Generally, in order to spread the word of mouth about their upcoming series, Nexflix share fans post along with the simple hashtag usually the title of the show. 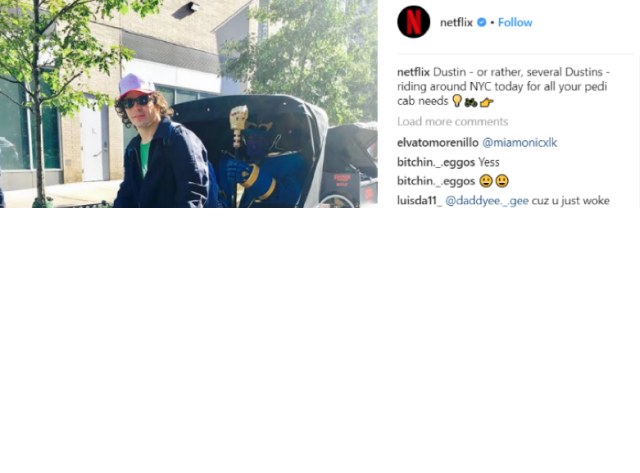 In one such campaign, Netflix uses #StrangerThings2 in their hashtag to promote the show. The curious Instagram followers of the series looked back at the Instagram page of Netflix. Getting entertained by the idea, people started to share their photos with the strange things in their lives along with the title as the hashtag. With such an innovative campaign, Netflix generated over 1 million audiences in 2 weeks. This is one of the best examples of the user-generated content campaign.

National Geographic is one of the leading brands in terms of Instagram followers. It has more than 112 million followers. Hence, it is one of the best examples of leveraging user-generated content. 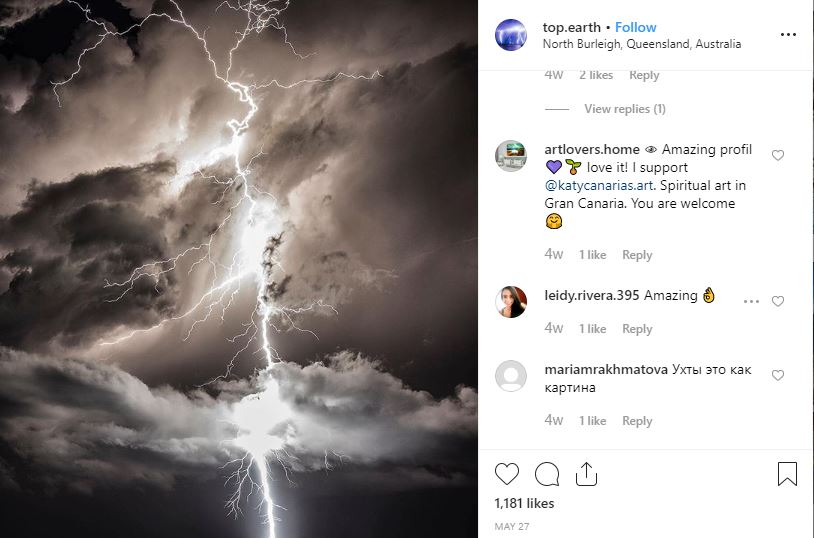 The campaign was very well accepted by the people and more than 63K posts were share under this hashtag on Instagram.

The Reebok x Crossfit “My Open Goal Contest” sponsored by SPRY, is one of the examples of how to target a niche specific audience and how you can encourage them to share the content. 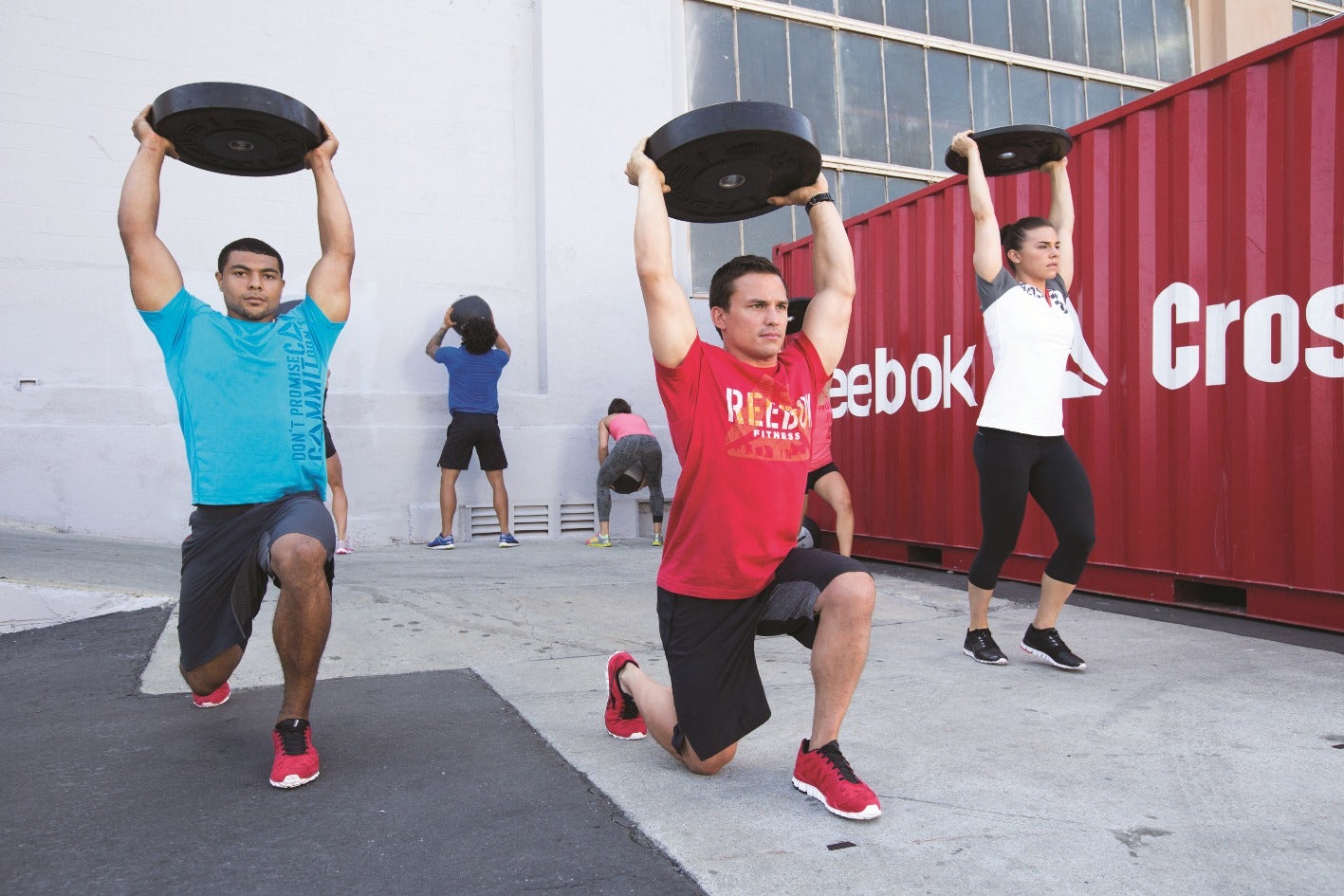 The campaign was launched to encourage the CrossFit in the New Year. Reebok encouraged this campaign by asking their users to make a video and record their CrossFit Goal. Their videos were then uploaded to a live video gallery and the lucky users were awarded the Reebok Footwear. The campaign was an instant hit.

In 2014, Starbucks launched its #WhiteCupContest under which they asked the users to draw the white cups. Starbucks announced that the winning of the #WhiteCupContest submitted by the artist would be selected as a limited edition template of the Starbucks. 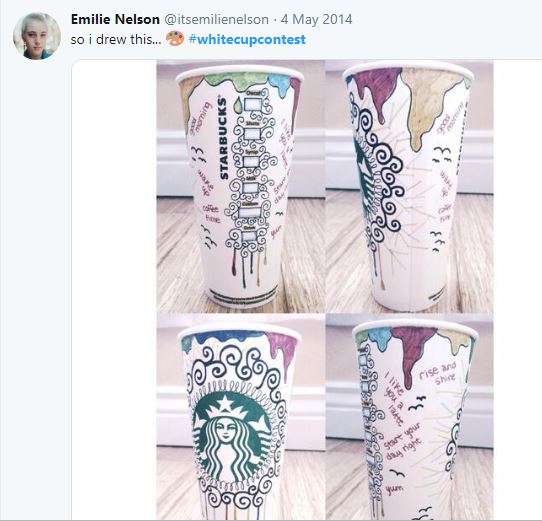 People actively participated in this contest and within 3 weeks, Starbucks received more than 4000 drawn cups from the customers. The campaign becomes hit in a very short period of time. 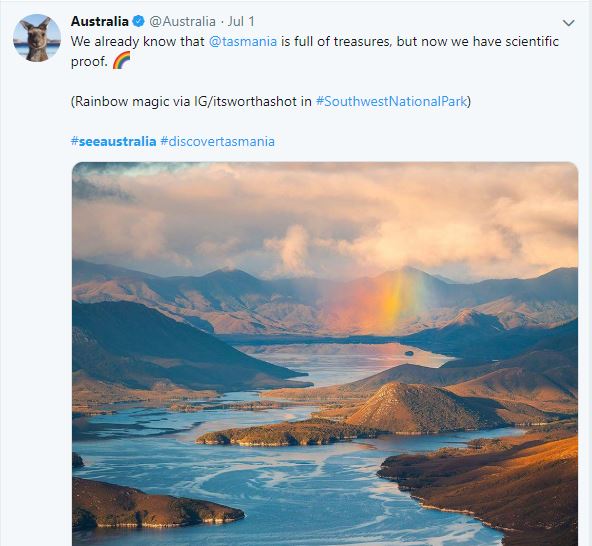 While doing research on social media, people from Tourism Australia came to know that a lot of content was available on the hashtag #SeeAustralia. Within seconds the brand realized that it’s a great opportunity to bring travelers into the conversation.

By highlighting the experiences of the people traveling in Australia, they created a community of both the people who have visited and who aspire to visit Australia.

By running multiple campaigns like Giga Selfie campaign, aquatic, and coastal campaign their aim was to attract the younger and socially active consumers, Tourism Australia finds a way to engage the users. With such innovative campaigns, there was a 30% increase in site engagement.

BMW is one of the well-known car brands across the globe. They share photos on Instagram of the BMW car owners along with their cars using the hashtag #BMWRepost. 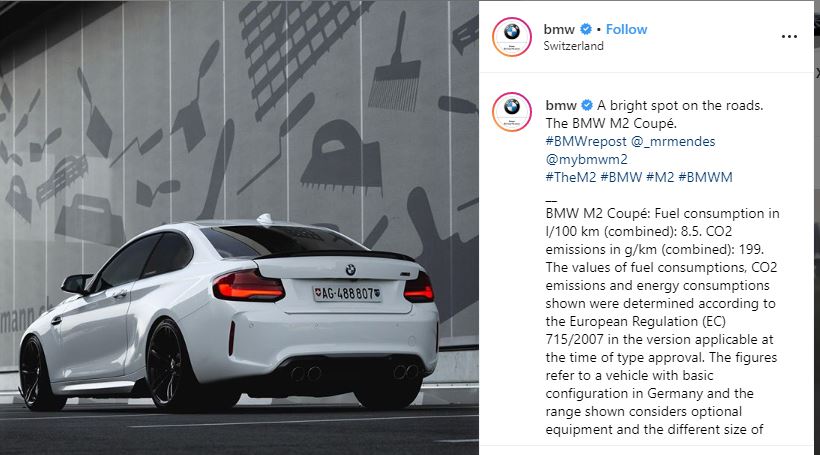 BMW is one of the most luxurious car brands and the owners of the cars are undoubtedly proud of their achievements, and the campaign #BMWRepost gives them a chance to showcase their achievements to the people. 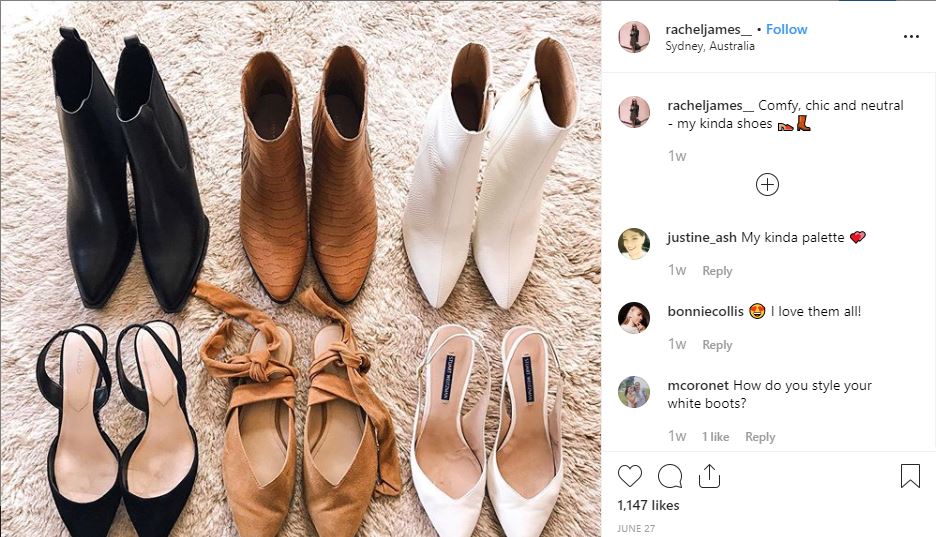 The campaign highlights the new shoe campaign along with a good cause- building schools in Ghana, Guatemala, and Laos through its partnership with Pencils of Promise. As the campaign was for a good cause, so it encourages the users to support the campaign to provide valuable education to the children. 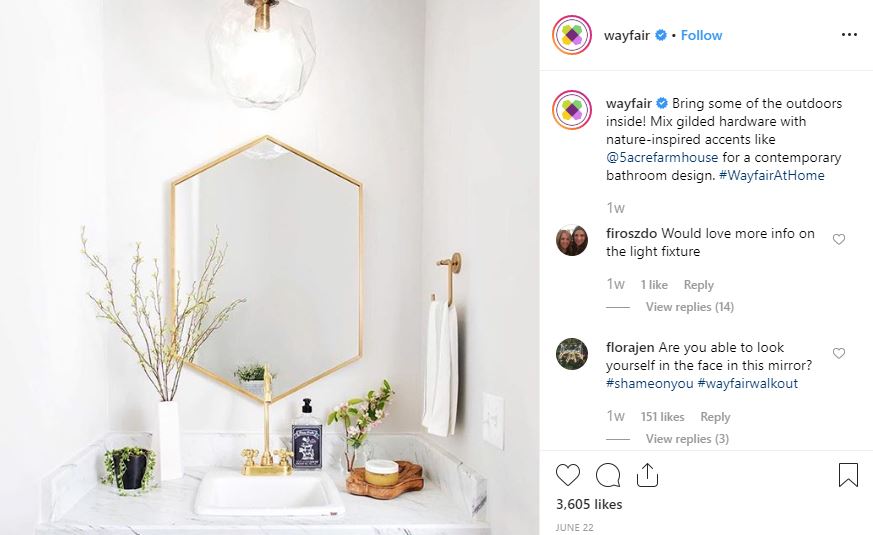 Wayfair is an online furniture store. They launched a UGC campaign for the customers to show their shopping spree. The customers were asked to share their photos and videos along with the Wayfair products under the hashtag #WayfairAtHome on Internet.

Wayfair then repost the photos and videos created by the people and provide a link to the post so that other customers can also see the actual image of the product and can relate better with it. 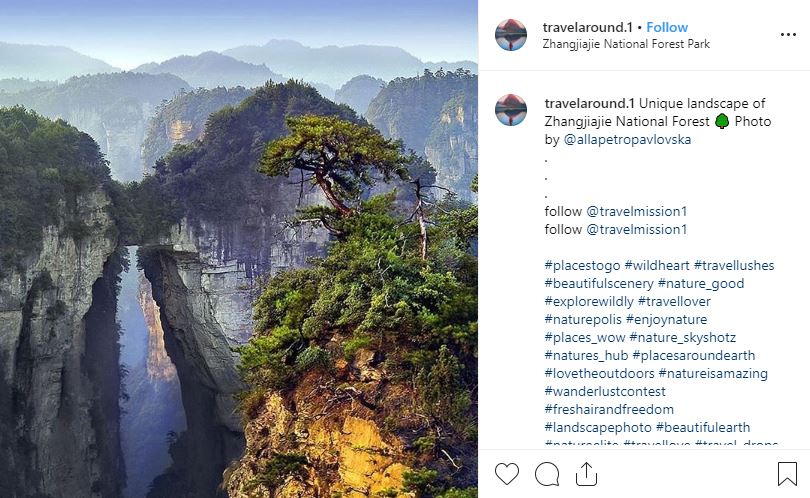